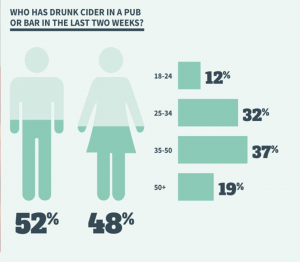 Now the Ashes are back where they belong, the Pub & Bar magazine have put their own averages together to analyse the consistently improving performance of Cider.

The data was collated by Cardinal, collecting opinions and data from customers, to create The Cider Report. Unlike many drinks, cider has an even split between men and women drinkers, displaying its diversity and Broad appeal. It is also interesting to note that the younger drinking age bracket have drunk the least amount of cider, perhaps displaying a reluctance to try something new or a lack of education in the expanding market. The middle bracket on the other hand are more likely to choose a premium product and are therefore not put off by a higher price or an unknown product. However, it does display an encouraging progression for cider and a willingness for the product in each category. 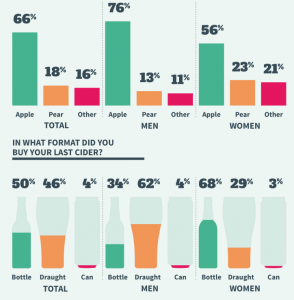 In the second graphic a clearer breakdown of what type of cider is being consumed by each sex is displayed. The Roooooot of the findings point towards an even spread of cider drinkers between men and women, however pear and flavoured varieties are extremely more popular with women with men sticking to the traditional forms. “One of the key growth drivers we have observed is the heightened demand for flavoured cider,” points out Kathryn Purchase, director of customer marketing at Carlsberg UK. “Consumers are increasingly discerning and are keen to trial new and interesting flavour profiles,” especially the women according to the research. The style of delivery also differs between the sexes, with men preferring the draught option and women strongly favouring the bottle. suggesting that women are more likely to chose a product based on appearance and quality of  branding where as men may trust the look of a product due to its position on a bar hand pump.

Thanks to Pub and Bar for collating the information and producing such aesthetic designs, we hope our readers enjoy your findings as much as we have! For more info visit them at http://pubandbar.com/.