Last weekend, Sean and I headed off to Frankfurt to go to Cider World’18 also known as Frankfurter Apfelweinmesse. It was the 10th year of this event being held there but the first under its new name of Cider World. This name change represented the exciting developments taking place internationally in the fast growing world of craft cider. It was a 2 day international cider tasting and awards event held in the beautiful Palmengarten (palm tree garden) area of the city. 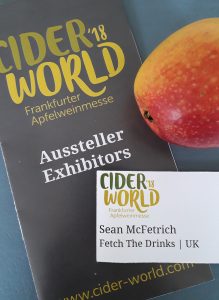 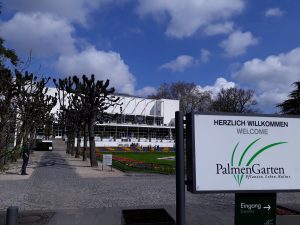 We stayed at the lovely boutique Hotel An der Messe in a quiet residential area just a short walk from the Palmengarten. The service was very good and the staff friendly and helpful. There was also a lovely secluded garden which was a real sun trap and a nice place to relax. 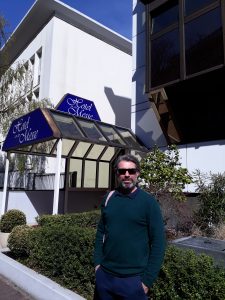 On Saturday morning, Sebastian from Cider Kultur, a fairly new German cider importer, came to meet us at the hotel.  After a leisurely al fresco coffee at a cafe near the university, we went along to the Gesellschaftshaus Palmengarten where the event was taking place. A stunning location with the white conference centre situated in lovely gardens with a beautiful fountain and a stunning tree-lined walkway upto the entrance. We were warmly greeted at reception, given our name badges and tickets for the following day’s event but no literature or information pertaining to that day’s schedule. So we were a little unsure as to what the format would be, but Sebastian, who was attending the event for the third time, was very excited. 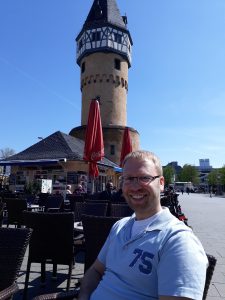 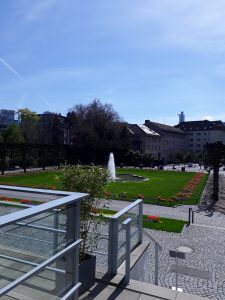 After collecting our official Cider World tasting glass, we entered a light and airy and fairly modest sized conference room on the first floor. It had sliding glass doors the length of the room which opened onto a beautiful terrace overlooking the gardens to the front. The room had been set up with banqueting tables covered in white table cloths which ran down the length of both sides. The 40 or so producers stood behind these tables with several bottles of their products on display. The atmosphere was very professional and there was barely any advertising on display. One notable exception was Long Ways Tipperary Cider which had a stunning eye-catching yellow banner showing their products complete with the strap line ‘You’d have to go a Longways to find a better cider’. This definitely caught my attention and made for an easy conversation starter. 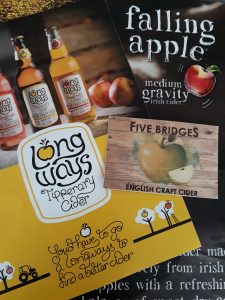 After mingling and tasting for about an hour and a half and meeting producers from many different countries including Luxembourg, Austria and the Czech Republic to name just a few, we were all invited through to the Awards ceremony which was held in another conference room set up in theatre style to accommodate several hundred people. At this stage I hadn’t fully appreciated that all those cider producers present were award winners. So I was a little startled when the host announced that there would be 40 awards given out! Apparently judging had taken place the day before with a panel of international judges. The awards ceremony took just under 2 hours, although it became evident that all producers present were awarded either ‘Honor’, ‘Silver’, ‘Gold’ or an ‘overall category winner’ award. It was very difficult to follow what was going on as no use was made of the projector screen to flash up the winners details, and there was no list of producers and product names or countries of origin to refer to. Moreover, within each award category, awards seemed to be given out randomly and not by cider type or country of origin. I think if this could be addressed in future years it would greatly enhance the experience for those attending. 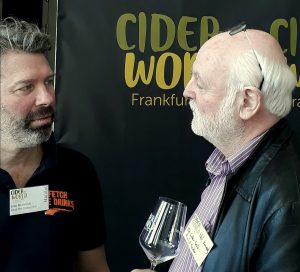 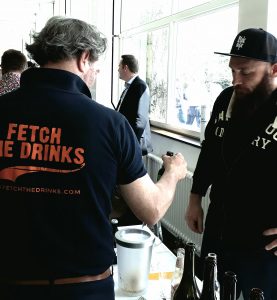 Anyway, with the ceremony concluded, we all returned to the initial conference room for more tastings and delicious, complementary refreshments served on tiered cake-stands on the sun-drenched terrace. However, although the mood was bouyant, the general feeling was one of a bit of confusion as to who had won what. This was a great shame, as a huge amount of time and effort had gone into the judging and collating of the information for the winners’ award packs which, on closer inspection, looked very informative.

The producers, and many who had attended the afternoon’s events, carried on partying well into the night. But as it was our first trip to Frankfurt and it was also doubling up as a short break, we headed, on foot, through the Aldstadt to the south side of the city, Saschenhausen, to sample the delights of a typical Apfelswein restaurant. 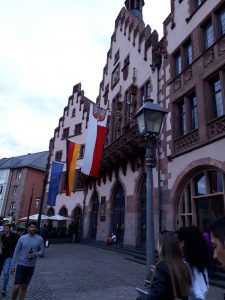 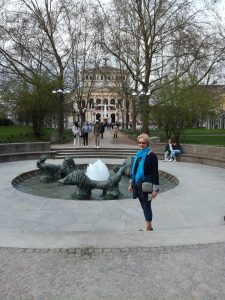 As the weather was so warm, we were able to sit out all evening at long wooden trestle tables in the walled garden of this bustling restaurant. Here we sampled the delights of Apfelswein. This is served in traditional, attractive, patterned stone-jugs known as Bembels. The Apfelswein was fairly dry and more like a typical English scrumpy. It was also quite refreshing when mixed with wither water or lemonade (a local tradition), which obviously made it a bit sweeter! We combined this with plates of Weiner Schnitzel, potatoes and the famous Frankfurter Green sauce which is made from sour cream and herbs. We also had the good fortune to sit with some friendly young Germans who introduced us to another speciality – Mispelchen – which is a brandy made with medlar, a persimmon-like fruit. Delicious. 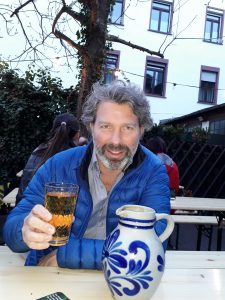 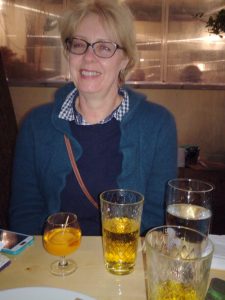 Sunday was another beautiful day with temperatures reaching 20 degrees. After a leisurely breakfast overlooking the hotel’s garden, Sean and I headed along the magnolia tree-lined avenues, through Beethovenplatz, back to Cider World where tastings for the trade were starting at 11 before opening to the public at 1pm. 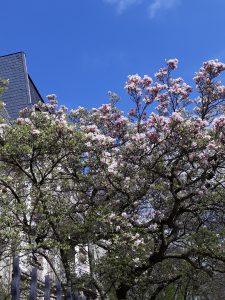 The place was abuzz. The reception area had moved to a larger space where we were warmly greeted by an army of smartly-dressed cheerful young staff who digitally checked our tickets, provided colour-coded wristbands and even put them on for us. More importantly, we were each given a tasteful black fabric bag complete with a booklet listing all the producers, countries of origin and where to find them in the Exhibition hall or gallery. Most useful, and a simplified version, even just on a single sheet would have been very beneficial the previous day.

After leaving a 10 euro deposit for the tasting glass, we entered the spectacular, ornate and galleried main exhibition hall which overlooks the interior of the Palmengarten house, resplendent with dramatic palms and elegant decor. What a fantastic setting. This time the space was bedecked with eye-catching banners, colourful promotional materials, some producers in national costume and most importantly, a stunning selection of ciders and apfelweins. Some 95 exhibitors in total from 16 countries. The atmosphere was fantastic with a great sense of enthusiasm and expectation in the room. 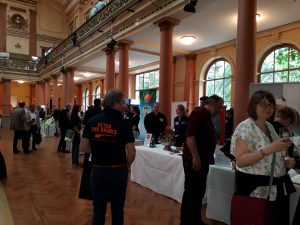 We spent a wonderful couple of hours meeting producers, hearing their stories and sampling a fantastic array of craft ciders and apfelweins. And this time there was no doubt as to who the winners were as they proudly displayed their certificates on their stands. We heard about the wonderful work being done by Ramborn Cider Company in Luxembourg who are working with more than 100 farmers to revive, maintain and improve the traditional meadow orchards. 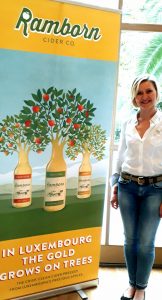 We met a Japanese farmer, resplendent in his red silk robe, from Tamura Farm who had brought a wonderful selection of his ciders and stunning apples and an Italian family, 2 sisters and their mother, who run Mela Godo in the Aosta valley. The expression means ‘pamper yourself’ but mela also means ‘apple’. 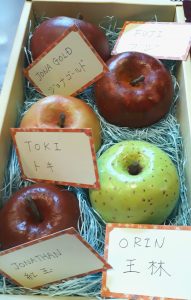 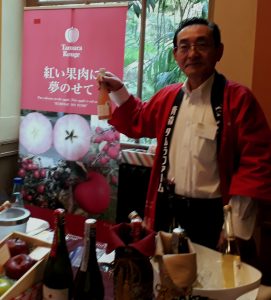 Then there was Karl from Blakstoc Cider, serious craft cider, in Vienna. Blakstoc means old tree in medieval German and his products are a combination of hops and apples which he describes as Europe’s finest hopped cider. They are hand-crafted from wild tree apples in the Styrian hills and in 2017 he was a Gold Medal winner at the International Cider Awards in London. 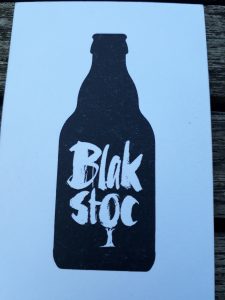 Sidras Bereziarta from the Basque country in Spain were 4th generation cider producers. Prior to 1936 there were 975 cider producers in this region but this now stands at 75.  Cider used to be drunk instead of water as it was safer!  However due largely to improvements in the quality of the local drinking water, the number of producers has declined significantly. 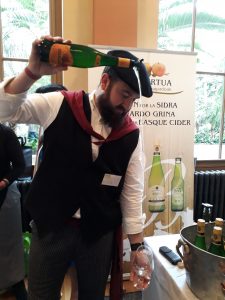 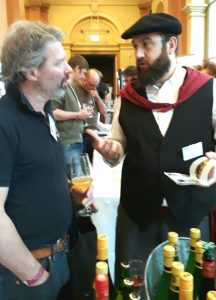 Horn Cider from Denmark won an award for their Freja cider which is named after a Nordic goddess. They combine all their products with local honey. Very tasty. In particular their dessert wine, Kvasir – Gylden Aeblevir (12.5%) which I bought a bottle of. 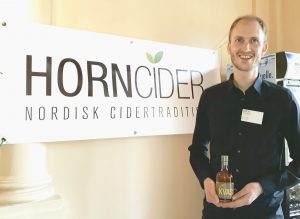 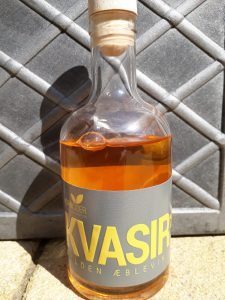 From Germany we came across Bembel-With-Care which was set up in 2007. Their products are all available in cans.  And their Apfelwein Gold (5%) with quince is particularly tasty. This is a modern take on the traditional apfelwien which was typically only available in bottles and served in large earthenware jugs called Bembels.  The name BEMBEL-WITH-CARE, combined with their logo which depicts a glass, a jug and 2 arrows indicating ‘this way up’, is a play on words Handle With Care. 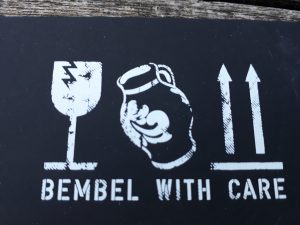 We also met an interesting gentleman who was helping to promote the local movement in Frankfurt to open a Deutsches Apfelwein Museum in the cellar of the Romer City Hall where there are old wall paintings depicting scenes of people picking apples in the orchards.  This medieval building in Frankfurt’s Aldstadt has been their town hall since 1405. 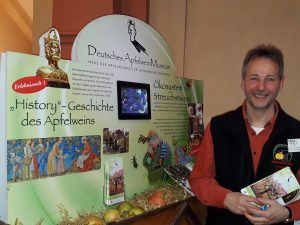 It was a fantastic event. The passion for keeping the orchards of the world alive and flourishing was evident. Moreover, the production of of fantastic craft ciders combining traditional methods with new and creative styles, blends as well as packaging and promotion was truly inspirational.

The only shame for us at Fetch The Drinks is, that bar one or two Irish producers, the ciders at the Exhibition are only available in bottles, not bag in boxes (BiBs) which make up the largest part of our business supplying to wonderful cider festivals and micro pubs up and down the UK. Apparently any products served in BiBs are perceived as being of a lower quality than bottled produce and therefore producers feel they wouldn’t sell. But maybe in the way that Frankfurter Apfelweinmesse has transformed into Cider World, maybe BiBs will take their place in the mainland European market in time. Meanwhile, BEMBEL-WITH-CARE and their excellent selection of canned Apfelwein products may bridge that gap.

We finished off our stay with a lovely visit to the adjacent gardens – Palmengarten, which just had a modest entrance fee of 7 euros per person. The flora and fauna was stunning. 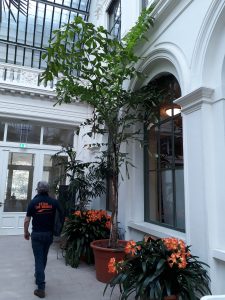 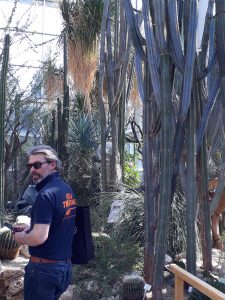 A fantastic weeknd. We will definitely be returning next year.