Harry mainly runs a grass farm running beef cattle and grazing dairy heifers. Their family have been farming in this area for generations. In fact, the last five generations on both sides of our family have farmed within 30 miles of where they farm today.  Cider was traditionally made by their ancestors for their own use.  The farm is situated on the edge of the Somerset Levels and this warm, damp climate is ideal for growing cider fruit.

The fruit is grown locally and in their orchard, they harvest, press and ferment on the farm.  The cider fruit is sorted prior to being washed, milled and then pressed. The juice is allowed to ferment on its own or by adding a yeast and nutrients depending on the final product.  The juice will ferment for about 8 weeks, but sometimes much longer in a cold autumn and winter. It is then ‘racked’ and matured prior to packaging. 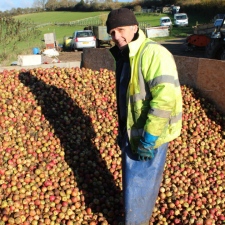 Born at King’s Farm, at the foot of Eggardon Hill, just a couple of miles from Lancombe Cross, Nick Poole has a deep knowledge of cider-making which is both local and traditional. His wife Dawn is from Axbridge in Somerset, so they are both blessed with natural cider-makers’ genes.

Before he got into cider making Nick was a builder in West Milton. He first started to make cider part-time about 15 years ago and during this time he founded the West Milton Cider Club. His speciality is a naturally sparkling full flavoured refreshing cider which he called Lancombe Rising, after the barn at Lancombe Cross where he makes it. Lancombe Rising is made by the old English method of keeving. Known as ‘cuvage’ in France, the method is still used in Normandy and Brittany to produce ‘cidre boucher’. This method has largely disappeared from England but, with the growth of industrial keg ciders, keeving allows the craft maker to produce a naturally sweet cider that can be bottled with its fullest flavour.

Over the years, Nick found that demand for both his traditional draught West Dorset Real Cider and the bottle conditioned Lancombe Rising was outstripping his production, which was limited to 7000 litres a year before Customs Duty becomes payable.  So with a burgeoning cider business he decided to end his building operations and become a full-time cider-maker with Dawn.  Nick collects traditional cider apples from his own orchards and other local farms and orchards. Throughout the long winter weeks, the apple bin at Lancombe Cross is constantly filled and emptied. The apples are mostly Dabinett, Chisel Jersey, Yarlington Mill, Michelin, Bulmer’s Norman, Browns and Kingston Black, all excellent quality bitter sweets and bitter sharps. 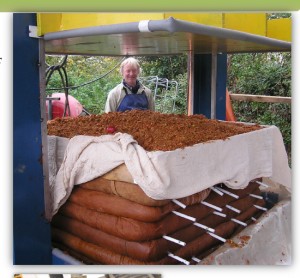 This 15 acre Organic Orchard near Bridport, West Dorset was planted almost 40 years ago and now has about 3000 mature cider apples trees including Dabinetts, Trembletts Bitters, Chesil Jerseys, Sweet coppin, Harry Master’s Jersey, Yarlington Mills and the very special Porter’s Perfections as well as 100 younger dessert apples.  The orchard has been restored into a working farm run by the Strong family, producing award winning artisan ciders, apple juice, a variety of flavoured apple cider vinegars, honey and organic very, very free range eggs. In 2011, the Orchard gained (eventually) Organic certification with the Soil Association.  The orchard hens are moved throughout the orchard in mobile pens, so that they always have access to forage fresh grass and herbs, all making for the happiest hens and the most nutritious pastured eggs on the planet. They are also currently experimenting with rare breed grass eating Kune Kune pigs who are known for their love of fruit, grass and friendship. 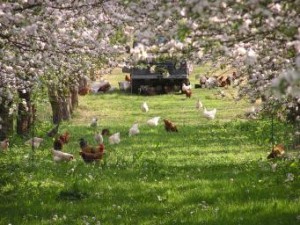 In the past the Bridport area was renowned for its orchards and premium quality cider.  Some of that was due to the wonderful limey soil found in West Dorset, although most of these cider orchards have now all but disappeared. The  geological soil type in the area which the orchard is located is called the Bridport sands is spread from South Petherton to Bridport, which has long been known to be especially nutritious.  Over a hundred years ago, between where the orchard is located in Waytown and nearby Netherbury which is just 2 miles away there used to be over 128 acres of cider  apple orchard now there is less than 25.  They hope to change this for the better, helping conserve the heritage of Dorset.