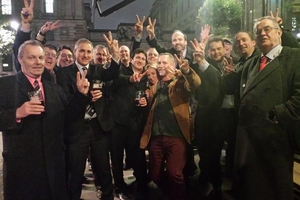 MPs voted today to end stiff rules that force their pub tenants to pay higher prices than non-tenants through a “market rent only” option for tied pubco tenants. Companies with more than 500 pubs must offer a market rent only (MRO) option.

Campaign for Real Ale (CAMRA) research found a pub company may charge £150 for an 11 gallon keg of Fosters, for example, compared with a wholesale price of £84. It welcomes the change saying this is “a landmark victory for beer drinkers, pub goers and licensees”.

But the British Beer and Pub Association (BBPA) said the move was “hugely damaging” and spoiled a practice that had done well for 400 years.  A spokesman said that the tie model was the most popular model and allowed tenants and owners – pub companies and brewers – to share the risk.

The association said that the Government’s own research found that 1,400 pubs would close and 7,000 jobs would be lost if the tie model was abandoned.  There are a further 7,500 pubs that are managed by pub companies and brewers, and almost 20,000 independents, according to the BBPA. The number of pubs has fallen by almost 13,000 since 2000.

Chief executive of CAMRA, Tim Page, says: “Today’s parliamentary vote helps secure the future of pubs. CAMRA is delighted that, after 10 years of our campaigning, MPs have today voted to introduce a market rent only option for licensees tied to the large pub companies – a move that will secure the future of the Great British Pub.”

Tim Page added: “Allowing more than 13,000 pub tenants tied to large pub companies the option of buying beer on the open market at competitive prices will keep pubs open and ensure the cost of a pint to consumers remains affordable. The large pub companies will no longer be able to charge their tenants prices up to 60 pence a pint higher than open market prices”.

284 MPs voted for the amendment moved by Greg Mulholland, LibDem MP for Leeds North West and chairman of the Parliamentary Save the Pubs Group. 269 MPs backed the government.