A freezing cold Ageas Bowl was the scene and Hampshire were taking on Essex at the start of the new T20 season, with the hosts looking to continue their impressive form of reaching finals day every year since 2010.

Of course we weren’t there for the cricket, but it made for a juicy extra to be pitched up on the boundary edge with our stall facing onto the square. I am sure it was all part of the boss’ master plan.

The Ageas Bowl, Fetch The Drinks warm up

Unfortunately, due to the licensing at the ground we were unable to sell our fantastic range of Hampshire cider’s and beer’s during the match, much to the disappointment of all who attended the game. Not only were we selling at a more competitive price but our extensive and lovingly produced product range would have made for a pleasant change to the usual suspects at the bar; we felt like KP to the main bar’s Andrew Strauss.  The products we were showcasing included the ; Mr Whitehead’s, 146 Cider, New Forest Cider, Laverstoke Park Farm and Vibrant Forest. However, we were not to be disheartened and were able to sell the concept and products of who we represent to a large number of future customers.  Furthermore, many customers returned after the close of play to take home their goody bag of ciders and beers.

Despite our hands being a bit like Monty Panesar’s (tied behind our back) it was still a great occasion for ourselves and all the other stall holders. Although, the alcohol selling legislation will not have changed by the next time we can hope for some slightly better weather though and hopefully another Hampshire win.

So despite not being a characteristic swashbuckling knock from the Fetch The Drinks team, they managed to grind out a positive victory in trying conditions to leave with their heads held high. The next home fixture at the Ageas Bowl will again provide a stern test, but with good technique and fast drinking between the wickets we can hope for another successful evening. 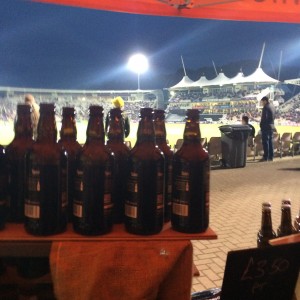 A big thank you must go to the Hampshire Fare for making the event possible and to the Ageas Bowl for hosting us. We promise not to excite too many customers with our craft range next time and leave them disappointed with the purchasing options. There is a craft storm brewing though, and although the big boys have kept a good line and length we are ready to clear the ropes and deliver to the public what they want.

You may be able to hold back KP, but you can’t hold back craft (n/o).